Our goal is to perform photochemical water splitting in homogeneous aqueous medium using various photo-catalysts and photo-sensitive molecules such as Ce(III) salts or 1,4-benzoquinones. The kinetics of the reactions is followed by spectrophotometry, which is also the light source for the photoreaction.

Photochemical water splitting catalyzed by cerium(III) ions is one of the main group of homogeneous reactions utilizing solar energy. In this process, the net reaction is the photochemical decomposition of water into oxygen and hydrogen gases. The energy necessary for the process is provided by the light and the catalyst of the process is the cerium(III) salt in aqueous medium. Although the reaction itself has been known for more than 50 years, there is still no thorough mechanistic information about it. So, our first goal is to study the detailed mechanism of the reaction, then with knowledge of the details to find the appropriate catalyst to speed up the oxidation and the reduction half reaction. 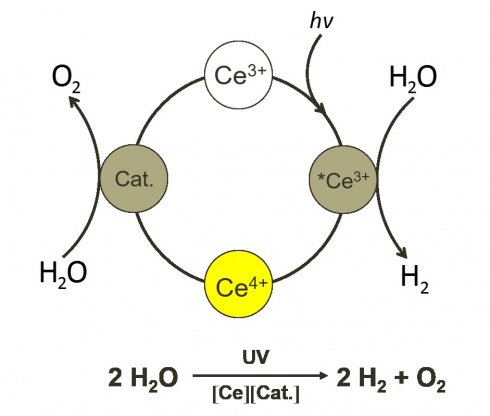 The first part of the catalytic cycle, i.e. oxidation of water by cerium(IV) can be catalyzed by light, or various heterogenic catalysts (e.g. ruthenium dioxide). The other half reaction, namely, the formation of hydrogen gas requires light or other energy source to take place. Based on earlier literature data, this later step can also be catalyzed. As a catalyst for these two steps, one should chose metal complexes without readily oxidizable organic ligands, since cerium(IV) is a very strong oxidizing agent. Such an agent is the ruthenium(III) aqua ion, but it is important to note that the presence of an organic ligand does not rule out the possibility of application as a catalyst: e.g. the tris-bipyridyl complex of ruthenium(II) can be used since this complex is stable enough to protect bipyridyl from fast oxidation by cerium(IV). Other possible ligands for the catalysts are the tetra-amido macrocyclic ligands (TAML). In addition to these, several cerium(III) complexes are known (including functionalized macrocycles as ligands), which show photochemical activity in aqueous solutions. By using these ligands, our expectation is to modify the cerium(III)/cerium(IV) redox potentials and also to prevent cerium(III) and cerium(IV) from hydrolysis under mildly acidic conditions. The second one would make possible to use less corrosive medium for the cerium(III) catalyzed water splitting by sunlight.

Another reaction type to utilize solar energy uses photochemical reactions oxidizing water (preferably in aqueous medium), then the reduced reaction partner can be used directly or indirectly to produce energy. On the indirect way, the reduced agent reacts with another redox system (e.g. carbonates) and reduces it to a form which is finally suitable for energy storage (e.g. methanol). One possible way is to use quinones as photo sensible compounds. Quinones are – depending on their side chains – readily soluble in water. They can also be found in biological systems (plastoquinones, photosystem II). When reacted with light, there are two major reaction types occurring in their solutions:

The net quantum yield of the two reactions is close to 1, and the first (side) reaction is pushed back by using tetra-substituted quinones. There are, however, exceptions from this rule: Plastoquinone is only a trisubstituted derivative of 1,4-benzoquinone but still, the second reaction is the main and biologically relevant reaction with light.
Another advantageous feature of quinones is that, by altering the side chain, the redox properties of the resulting hydroquinone can also be changed. In the second step, one or more of the following rection series may happen with hydroquinone:

Hydroquinones – depending on their substituents – are more or less sensitive to oxygen in basic medium, which is another side reaction, but a side reaction which reproduces the original quinone, so it only decreases the efficiency of the desirable photoreaction without losing the quinone as the catalyst.

The quinone/hydroquinone conversion can be useful and important for a flow battery used in aqueous solutions of anthraquinones recently described in the literature. As it is shown experimentally, this reaction is strongly influenced by light, so, it is easy to increase the efficiency of a quinone-based flow battery with appropriate illumination, or even to fill the cell with light, i.e. to convert solar energy into electrical energy.

To carry out these measurements, a method is worked out which uses diode array spectrophotometer as photoreactor and analyzing unit at the same time. This method uses a special property of the diode array spectrophotometers, namely the high light intensity passing through the sample. This polychromatic UV-Vis light is able to induce photoreactions. The instrument at the same time – being a spectrophotometer – can follow the kinetics of all reaction in the cell which are accompanied by the change of the color. More details about the instrumentation can be found here.